I’ve recently learned a new piece of Rust syntax related to specifying lifetimes with types that don’t have an explicit lifetime defined.

Confused already? So was I. The TLDR is here.

To save time for anyone who might already know about this “trick” here’s the resulting function definition:

The rest of this article is about explaining the + '_ part, why it’s needed and what it solves. Also, VSCode + RLS currently does not highlight this properly, which tells me this is a pretty niche feature.

Before I begin explaining what the issue was and how it’s solved, I think it’s best to show the overall problem I was trying to “code my way around”.

I’ve been trying to refactor the code in Texel ASCII Art Editor so that I can abstract away the dependency on Termion. The main goal was to add support for Crossterm and thus enable Windows compilation. Termion and Crossterm are both “terminal libraries” allowing to both read input (keys etc.) and output text and commands to the terminal.

I already abstracted the drawing parts but still had to handle the input events loop which looked something like this:

I needed to abstract away this whole loop and mapping. I thought if I do it all in one go and refactor the existing input_map code into something like a InputSource generic struct I could easily swap implementations around.

The idea was to have a loop that looked like this:

The idea seemed straightforward at first. I’ve put the original InputMap code into the newly created Inputsource such that:

Now I needed to add an iterator that can consume the original termion::input::Events iterator that’s returned by the “expanded” Stdin::events() call.

This new iterator needs to unwrap the contents, unwrap the Result as well and then perform the original InputMap::map_input call somehow. Definition is:

So far so good. I have a working “iterator-mapper” constructed with a basic ownership model. InputSource gets constructed with the required mapping from the disk (config file) and stores it as a HashMap.

A note about the first use of '_: it means anonymous lifetime and in my mind translates roughly to “explicit lifetime, but elided”, so that we don’t need to name it and there’s no need to declare it at the impl level.

In both our implementation blocks here we don’t really use the lifetime for anything and so it can just be “elided explicitly” here.

The only remaining part is the InputSource::events method which should create a new mapping iterator each round. Here’s how that looked in my first iteration:

First thing to notice here is that we use the anonymous lifetime '_ again, but in the return type. This has a different meaning than in the implementation blocks before. Whereas before it meant we don’t need an explicit named lifetime since we don’t “use” it, in here it means “single lifetime for output”. We’re basically saying that the return value is borrowing from self and thus needs to outlive this InputSource.

This code worked as-is but it has one major flaw. The MappedIter type is returned directly mandating it to be public. MappedIter is however a termion specific piece of code that I’d like to keep hidden. There’s no reason why I need the main program to “see” it either since all I care about is that it’s an Iterator<Item = Event>.

I thought I can easily solve this by changing the definition to:

this return type evaluates to the "'static" lifetime...

The error is a bit cryptic but I looked at my code again and got the basic gist of the issue.

It’s best visible by looking at the two versions of the function definition side-by-side:

Having a second look made me realize that the real problem is my code is “lossy” here. If MappedIter didn’t require an explicit lifetime definition this would “just work”.

But MappedIter<'a> does require a lifetime definition because it has a reference to a HashMap inside it. The ownership model is very basic, InputSource owns the HashMap and MappedIter therefore has to live in its lifetime.

The problem is that impl Iterator<Item = Event> does not specify a lifetime, and also has no lifetime in its own definition.

At this point I thought that using the impl keyword here was impossible. How can I specify the lifetime requirement to the return type if the return type itself is a foreign trait? It’s not like I can just add <'a> to Iterator…

The solution as mentioned at the start, is to add the odd looking + '_ lifetime “addition” at the end. I actually went to IRC channel and bothered a human about this, but if I knew how to read properly the Rust compiler already told me a few lines below the error:

And there we have it right? Well, sure it compiles but.. why does adding + '_ fix this and more importantly, what does it mean?

Looking at the anonymous lifetime definition explains the core lifetime problem and to an extend the solution, but the examples shown there don’t do any kind of “summing”, so what’s going on here?

In order to understand why a plus sign is used here we need to look more at what the impl keyword means in the return type definition.

The documentation clearly says it, the syntax is fn name() -> impl Trait. This means that anything coming after the impl keyword in this context is a Trait definitions. The plus sign suddenly makes sense.

Traits can be “combined” with the plus sign, and more importantly for our use case, can be also combined with lifetime definition. The whole expression becomes in essence a new trait.

Adding the + '_ just means we’re defining out Iterator trait to have an explicit lifetime that gets elided to mean “for the duration of self“ thus fixing the “lossy” problem.

As an interesting side note, VSCode does not highlight this type of syntax properly at this time, which tells me this is a pretty niche syntax.

Introducing the MAX7219 segmented display driver. The driver was originally written by Maikel Wever and later picked up by me and improved. 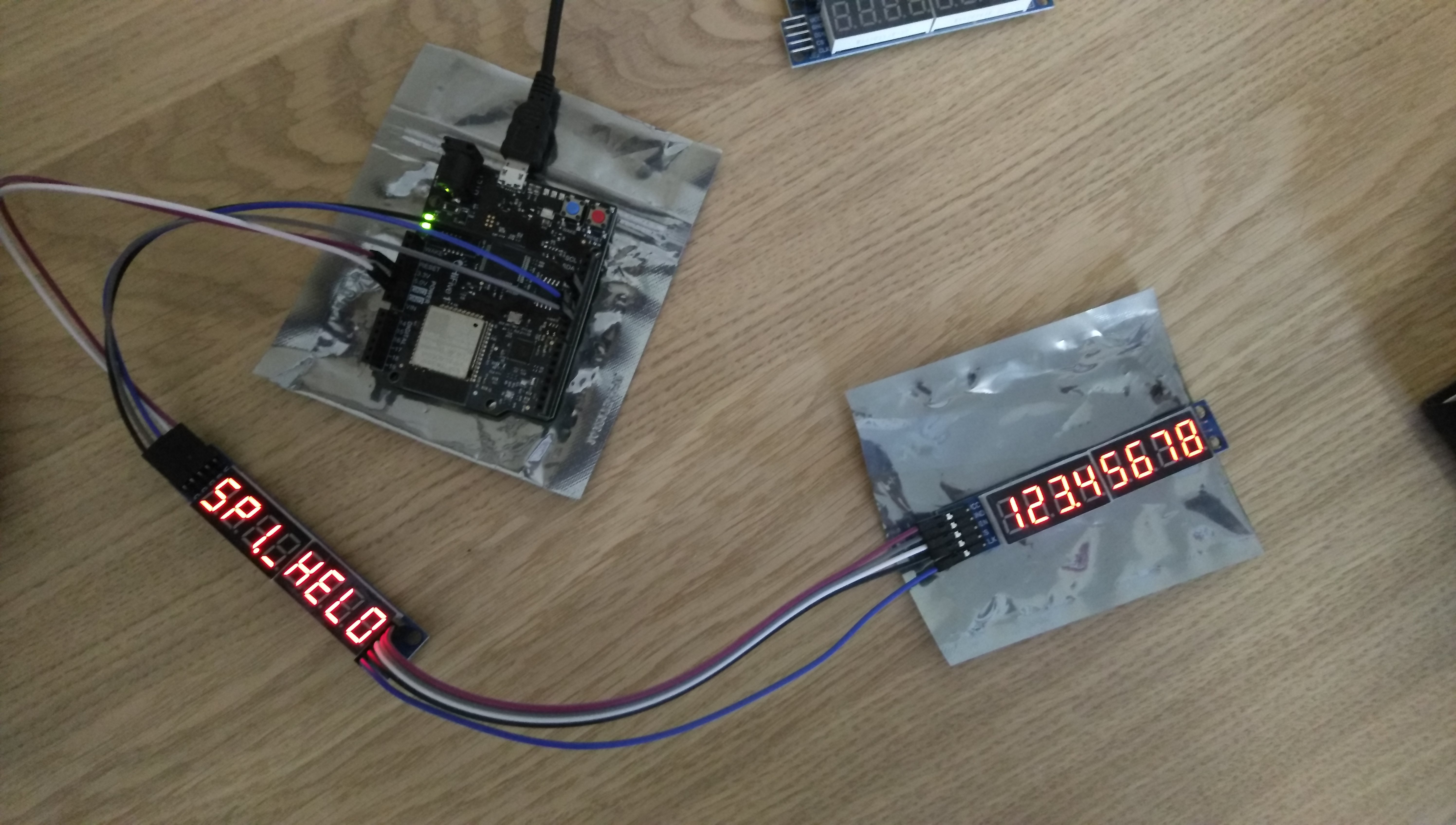 This driver supports the MAX7219 and MAX7221 chips used in segment and led matrix displays.

I’ve tested the driver with my hifive1-revB board with two sergmented displays connected in series.

You use the DOUT pin from first display and connect it directly to the DIN (MOSI) pin on the next display.

To use the driver you need to instantiate embedded-hal for your specific board. Usage is fairly simple after that, here’s a short example using GPIO pins.

I’ve created a project with examples using the driver via SPI as well as individual GPIO pins utilizing the hifive1-revB development board.
You can also check out the documentation for the driver.